On a wing and a prayer. The phrase normally nods to an element of reckless chance but it speaks of other matters in the life of Jeremie Frimpong.

The benign winds of football fate have wafted him on to a Clyde shore but there is a strength to the 19-year-old. It not only pushes him relentlessly down the wing on match days with Celtic but invests his life with purpose.

‘I am a really religious man,’ he says. ‘If you want to go to get something, God will always be with you. I have that faith. I believe in that and it keeps me going.’

This faith has accompanied him from his early childhood in Amsterdam, through his subsequent years in Manchester and now to his present incarnation as an exciting right back with as yet unrealised potential.

His belief is powerful but it is backed with hard labour. ‘I was raised well. If I want something, I should go and get it,’ he says in an echo of the credo that proclaims that the Lord helps those who help themselves.

Frimpong is amiable, already renowned for his chirpiness, but in some matters he is profoundly, unexpectedly serious.

‘I have found a church in Glasgow and will go there post-Covid,’ he says. He eschews nights on the town for meetings to discuss scripture.

‘I read the Bible for 20, 30 minutes every night or I talk to my sister about it on FaceTime. There is also a group on FaceTime where the pastor talks and we interact or just listen.’

It has helped him adjust to a new life in a new city. He chuckles when reminded his faith means he will never walk alone in an echo of the song sung by Celtic fans.

‘Exactly that,’ he says. ‘When I am by myself, God is always with me. God is always helping me. With that, anything and everything can go well.’

It is certainly travelling at rapid speed in green and white hoops. A year ago, Frimpong was regarded as an interesting signing: a diminutive, quick and resourceful full back from the lower echelons at Manchester City. As the 2020-21 season starts, he is a bona fide Celtic first teamer with two winners’ medals on his CV and a hunger for more on his agenda.

If his future is intriguing, his back story is fascinating. The family moved from Amsterdam in search of a better life. With four boys and three sisters, Bernice and Bernard Frimpong had heavy responsibilities.

‘Sacrifices were made for me to be a footballer,’ he says. His younger brother, Wesley, plays for Bolton Wanderers and his two older brothers played, too. ‘They stopped because they weren’t good enough,’ he says laughing.

Frimpong, though, kept going. He is not burdened by doubt or intimidated by the reputation of others. His upbringing at Manchester City brought him into close contact with players such as Jadon Sancho but he is respectful rather than in awe of his contemporaries. ‘Yeah, he’s a good, good player,’ says Frimpong but this is said in the manner of a business-like appraisal rather than a gushing tribute. 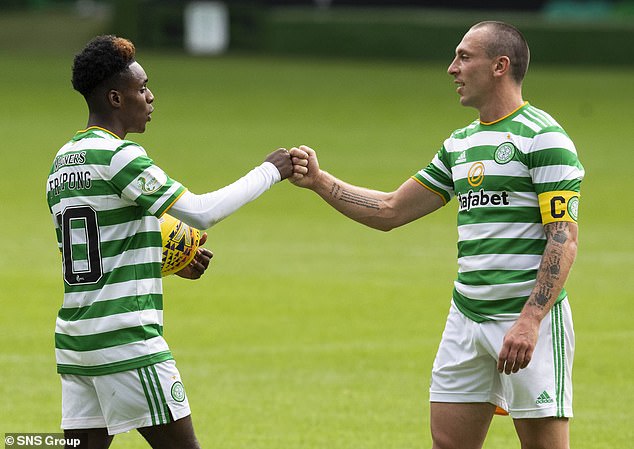 He has a sense of his own worth. ‘There is strength in my family,’ he says. There is a pride, too. ‘My mum did well. She knew I always wanted to be a footballer and it puts a smile on her face when she sees me now, but it puts a smile on mine, too.

‘You are making your mum happy, that’s everything. She comes and visits me but she doesn’t go to the games. She doesn’t understand football. She just stays in my house. She says Glasgow is too cold.’

And dad? ‘He loves football,’ adds Frimpong. ‘He says he was good but I don’t believe him. When I was in Manchester and City were playing in the Champions League, I would go to the shop and buy Doritos and we would watch the games on TV. That was good.’

The taste for simple pleasures continues. Frimpong’s social life revolves around friends at the club — particularly Luca Connell and Jonathan Afolabi — and trips to the cinema, arcades for basketball games and restaurants. ‘I like a Nando’s,’ he says.

‘The biggest lesson? At Under-23 level you are playing once a week. At Celtic, the games just keep coming at you.’

The first match was an opportunity rather than an ordeal.

‘I wanted to show everyone what I had. I said to myself: “I am 100-per-cent ready”. I knew my ability. I knew I could help the team,’ he says of his debut against Partick Thistle in a 5-0 victory on September 25. His performance was highly praised but there had already been whispers about the impression he made in the Celtic dressing room.

Frimpong remembers his first meeting with his team-mates. He says: ‘I just clicked with them right away. I am a happy guy. I just walked in and said: “I am Jeremie”.’ 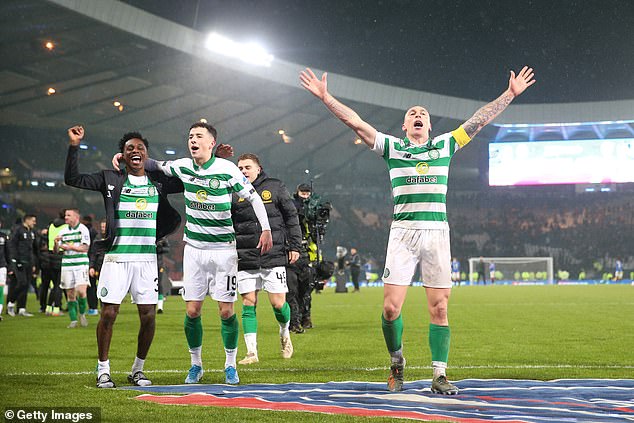 This innocence was followed by the slagging ritual. ‘They joke about my earrings,’ he adds.

But Frimpong has become the youngster who is constantly asking questions. ‘What’s the league like? What’s the first team like? Any advice you can give me? What should I do on the pitch? How can I help the team? I ask everything,’ he admits. ‘They just tell me: “Don’t pressure yourself. We will help you out as much as possible. Just go and play your game and you have nothing to worry about”.’

It is a philosophy he holds close. ‘I do not pressurise myself by thinking about the size of the crowd or whatever,’ says Frimpong. ‘I came here because of the history of this club. I knew it was a big, big club. I knew the team was good and I knew I could achieve something. I want to win trophies.’

Again, there is a simplicity and it is reflected in the way he reacts to three matches that perhaps best define a season that ended with him voted by supporters as the best young player at the club.

On October 27, he sparkled when Celtic defeated Aberdeen 4-0 at Pittodrie. This laid a marker for the season but it also pointed to Frimpong’s impact on the dressing room. He was pushed to the front of after-match celebrations. There was a feeling that he had impressed his colleagues and kind words were said.

‘It was nice to hear that from my team-mates,’ he says. He does not go further, insisting: ‘It is all about helping the team.’

The first came on January 22 when Celtic won 3-1 at Rugby Park but Frimpong was carried off after a hefty challenge by Kilmarnock’s Alan Power.

‘Tackles like that are part of football. The game is not always nice and you are going to get hit. It was just unlucky that I got injured that day,’ he says. Any resentment? ‘No, no. No hard feelings.’ 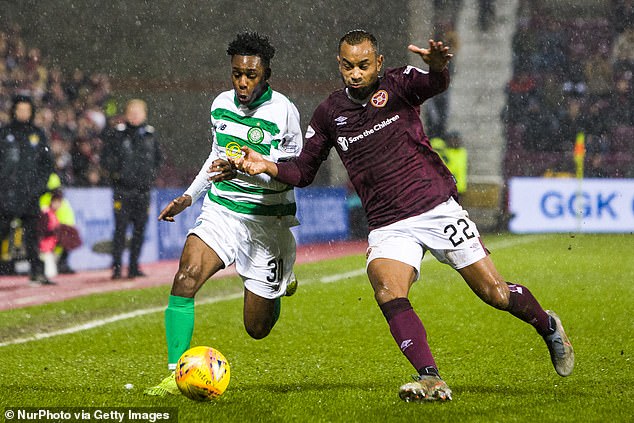 He displayed toughness and resilience in that moment but the afternoon of December 8, 2019, demanded other qualities. Celtic defeated Rangers 1-0 in the League Cup final but Frimpong was sent off after a challenge that led to a penalty saved by Fraser Forster.

‘Honestly, I don’t look back on that all,’ he says. ‘Being sent off is part of football. You can’t dwell on it because you have to look at the next match. We won at the end, so why am I going to think about a red card?’

The victory was watched by the Frimpong family, who quickly appreciated the passion of Jeremie’s new playground.

‘They could not believe it,’ he admits of the atmosphere. ‘People would grab them, hugging them in celebrations. My young sister was laughing because supporters wanted to take pictures of themselves with the family.’

In what could have been a moment of self-castigation, Frimpong found joy and satisfaction. It is a trait that he brings to life off the park.

‘I have changed a lot over the past year,’ he says. ‘I was used to seeing the faces of my family every day but I have had to learn to live by myself.

‘I had to learn to live without being among my friends in Manchester. I have made new friends, I have focused on football. Everything has changed.’

The new season promises further challenges as Celtic target an unprecedented fourth successive domestic Treble and a run in the Champions League. The quest for ten in a row will dominate the campaign, though Frimpong senses no added pressure.

‘Every season is a big season,’ he says. ‘I am going to go about it as just another season with just the same focus. I want to win with my team-mates. And that is what I will do.’

The future is fortified by the past. ‘Glasgow by myself was different. I was bored by myself but I made friends, adapted quickly. It is all part of being a footballer. You have to do things like leaving home at a young age if you want to succeed,’ he says.

Frimpong adds: ‘It’s not been easy but it has been good.’

The best may yet be to come.