By Adrian Kajumba For The Top Soccer Star Republishing

After scrapping extra time for the first five rounds this season, here was a good case to ditch the 90 minutes too.

With regular time largely uneventful, the best action came in the penalty shootout, with the first 20 takers all scoring and no lines fluffed until Asmir Begovic’s spot kick was saved by Wayne Hennessey who then blazed his chance to win it high into the empty stand, goal-kick style.

The tie was finally settled when Begovic, making his first Bournemouth appearance for 528 days, dived to his left to deny the usually reliable Luka Milivojevic’s second attempt of the shootout. 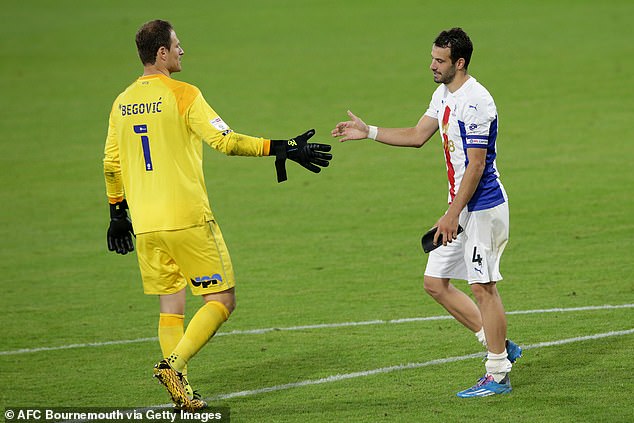 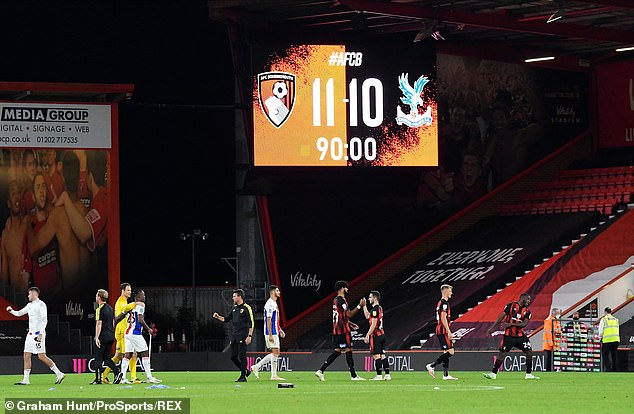 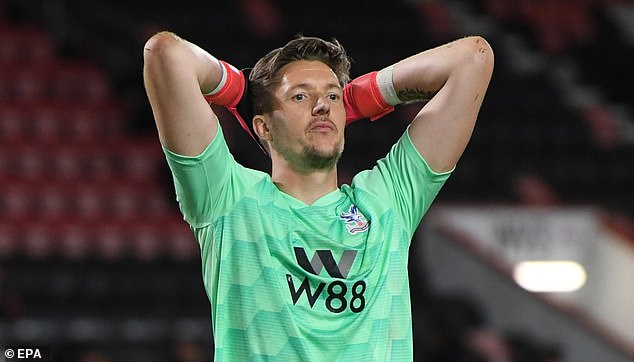 With the added demands of the Championship schedule in an already congested season, Manchester City away in round three it might not feel like much of a reward for Bournemouth.

Of the two sides, they were at least the ones who displayed the greater desire to win.

A disjointed opening was to be expected with the flurry of changes, 19 between the two clubs, and debutants on show.

Defenders Jordan Zemura and Nnamdi Ofoborh featured for the first time for Bournemouth while left back Jaroslaw Jach and Nya Kirby, a member of England’s Under 17 World Cup winning squad alongside the likes of Jadon Sancho and Phil Foden, were also making landmark appearances for Palace too along with full debutant Ebere Eze, the south Londoners’ £20m summer signing, and Michy Batshuayi, a second time around following his loan return.

Moments after Harry Arter, donning a Cherries shirt for the first time in 972 days after loans at Cardiff and Fulham, tested Wayne Hennessey, Kirby extended Begovic at the other end, the experienced keeper ending his long absence after loans at Qarabag and AC Milan.

Kirby was inches away from converting Jeff Schlupp’s cross only for it to skip off the turf before he could readjust his feet. 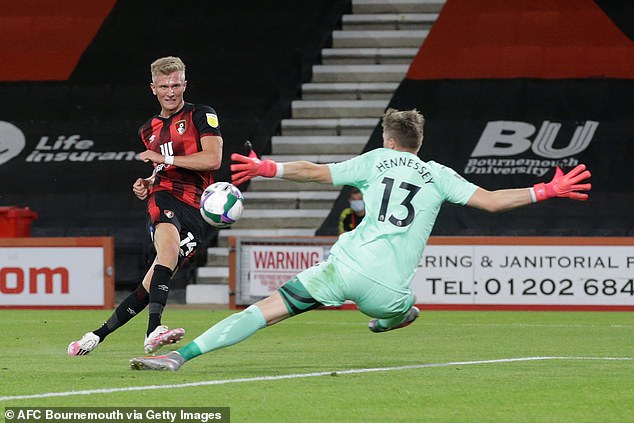 Sam Surridge fires the ball past Wayne Hennessey, only for his first-half strike to be ruled out 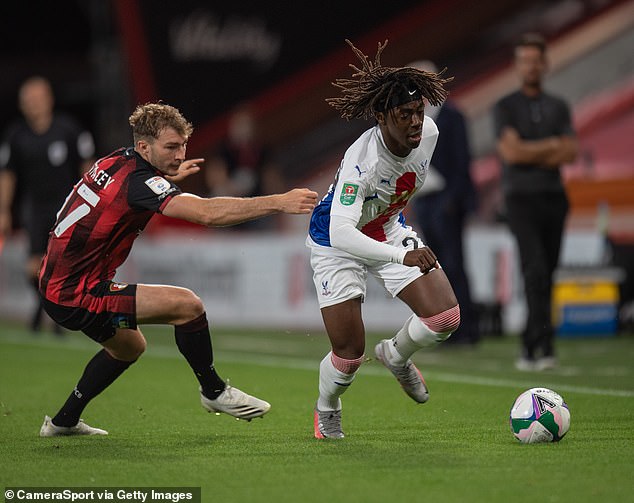 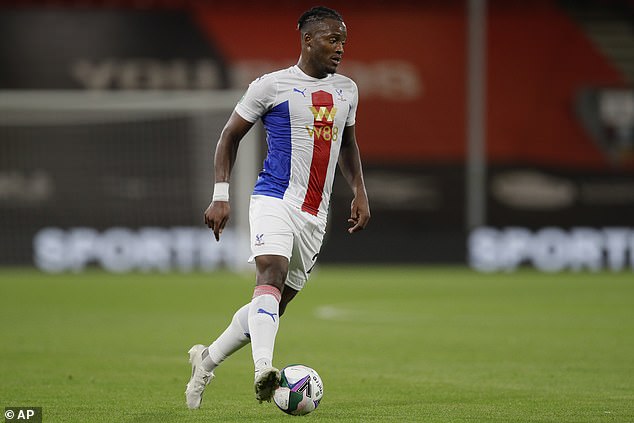 In between, Bournemouth were the better side and had it not been for what appeared to be an incorrectly raised flag that denied Sam Surridge the opener, they would have deservedly led.

Right wing back Jack Stacey became an unlikely after the break forcing Sam Woods into a desperate last ditch block and then Wayne Hennessey into a plunging save to keep the score level.

But, despite a late Palace improvement following the introductions of Jordan Ayew and Andros Townsend, the game remained goalless and drifted to penalties where the real drama unfolded.

Bournemouth manager Jason Tindall said: ‘You want to pit yourself against the best teams and people in the industry you’re in.

‘It has always been tough for us against Manchester City but it’s a great opportunity to give a really good account of ourselves.’

Palace boss Roy Hodgson said: ‘I wish Bournemouth good luck against Manchester City. Neither Jason nor myself were particularly enamoured by the fact we knew whatever happened, we were on our way to Manchester City.’ 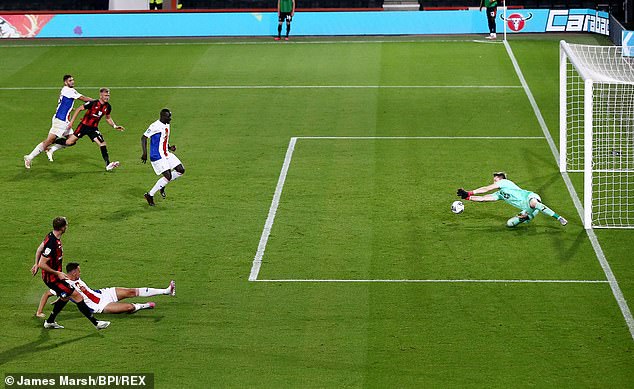 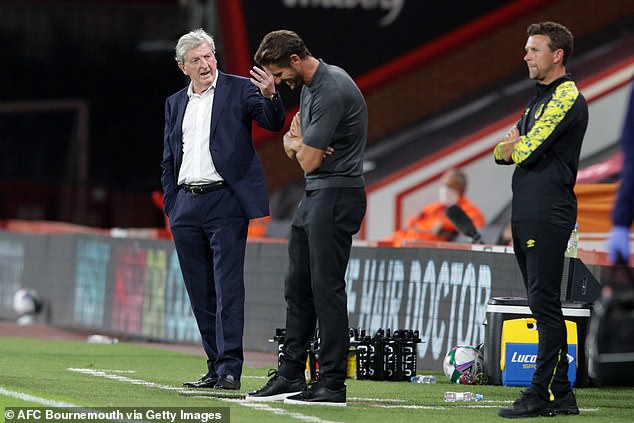 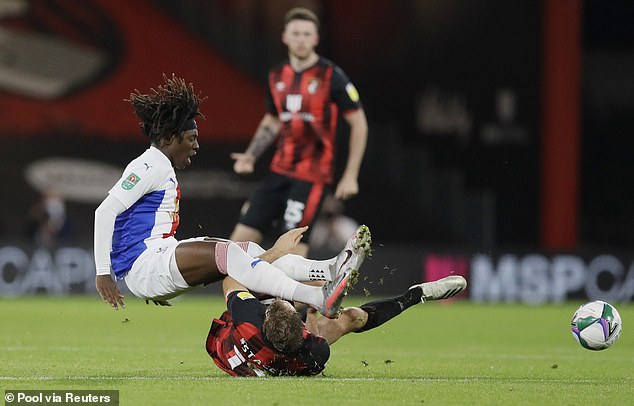