Top Football News
Juventus and Sarri ‘still in talks over manager’s compensation following his sacking...
Ronald Koeman has no concerns about his Barcelona future following the resignation...
Royal Antwerp vs Tottenham – Europa League: live score, lineups and updates
James Rodriguez ‘is struggling with a testicle injury’
Real Madrid ‘would consider a swap deal involving Isco and Vinicius for...
Italy boss Mancini sad to see Balotelli as a free agent and...
Barcelona candidate Victor Font wants Pep Guardiola BACK in bid to tempt...
Gary Neville was RIGHT: Son Heung-min deserves to be compared to Sterling,...
Willian admits Mikel Arteta’s tactics have left him ‘frustrated’ as he adapts...
Juventus plan to stick with rookie boss Andrea Pirlo but have plans...
Home Serie A Leicester confirm signing of Roma winger Cengiz Ünder on season-long loan
Serie A

Leicester City have confirmed the signing of Cengiz Ünder from Serie A side Roma.

The winger has joined the Foxes on a season-long loan and will make the deal permanent next summer. The clubs outlined an agreement with Leicester paying £2.7m for the initial loan and a further £21.9m in 12 months.

Under has made 70 Serie A appearances for Roma and has 21 caps for Turkey, scoring six international goals.

Speaking with the club’s website, Cengiz admitted that Leicester defender, international team-mate and ‘best friend’ Caglar Soyuncu was a big factor in his move.

He told LCFC.com: ‘I can’t wait to go to Leicester and start training. I’ve always wanted to play in England and this is a great opportunity to play in the Premier League.

‘I will try to help my team-mates on the pitch and off the pitch and I believe that I can improve my performance every day. I think I am fast and can create lots of chances for my colleagues.

‘I feel very good because my best friend plays for Leicester City. I am very happy to be able to play with Çağlar [Söyüncü] and I always watched Leicester’s games because of him.’ 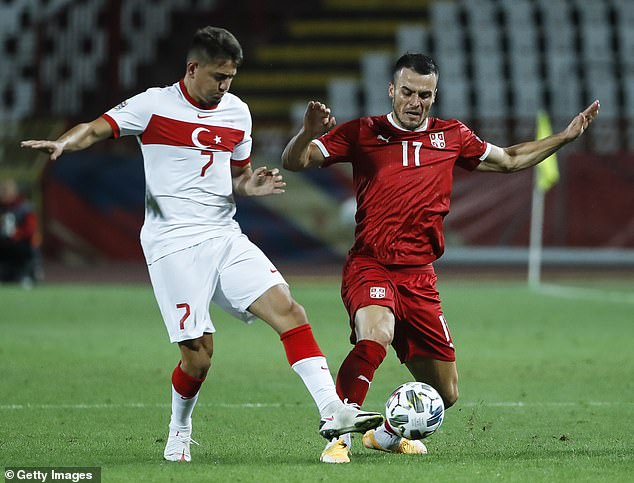 Under has become Leicester’s second signing of the transfer window following the arrival of Belgium full-back Timothy Castagne from Atalanta for £22m, as a replacement for £50m Chelsea signing Ben Chilwell.

Castagne made an impressive debut for his new club, scoring in the 3-0 win at West Brom last Sunday.

The new arrival is set to join-up with his team-mates for training ahead of their Premier League clash with Burnley.

Juventus and Sarri ‘still in talks over manager’s...

‘I don’t know what will happen’: Barcelona target...