In the end, Rangers owned all the fireworks that mattered. Four unanswered goals sent Willem II’s Europa League hopes up in smoke and added another sparkler to Steven Gerrard’s collection of qualifying results.

The Ibrox outfit showed no sign whatsoever of being disrupted by the explosive tactics of some of the Dutch club’s ultras.

A group of them made the trip to nearby Eindhoven at around 3am on Thursday to let off noisy pyrotechnics outside the hotel where the Rangers squad were sleeping.

HOW SCOTLAND’S OTHER TEAMS FARED?

Further flares then greeted Gerrard’s men when they arrived at the Koning Willem II Stadion before kick-off.

On the pitch, however, the threat posed by the hosts quickly fizzled out. Inspired by the excellent Ryan Kent, who scored and had two assists, a play-off against Galatasaray in Glasgow next week was comfortably secured by Rangers.

They now stand just 90 minutes away from a third successive season in the Europa League group stage.

Aside from prestige, the £2.5million of UEFA prize money on offer for qualification would be very welcome as Scottish football faces up to the absence of fans in grounds for the foreseeable future.

Kent won the penalty that was converted by James Tavernier before netting himself prior to the break. Second-half headers from centre-back pairing Filip Helander and Connor Goldson then set the seal on a comfortable victory over a team who finished fifth in last season’s curtailed Eredivisie.

It wasn’t perfect. Rangers had to rely on Allan McGregor’s excellence to secure a clean sheet, with a clutch of highly-impressive saves to deny Willem II any hope of a comeback. Gerrard, though, will be more than satisfied with the sizeable margin of victory before domestic duties resume at Fir Park on Sunday. 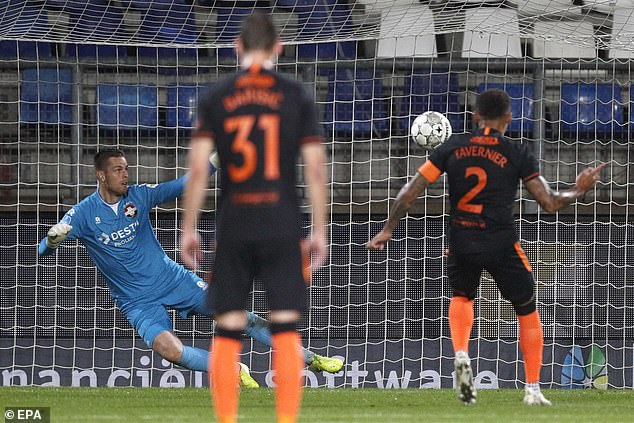 Injuries had bitten into some of Gerrard’s options — particularly in midfield — but he was able to juggle his goalkeepers again.

After conceding for the first time this season in Sunday’s 2-2 draw at Hibernian, Jon McLaughlin was demoted to the bench to allow a recall for McGregor.

The 38-year-old had featured in the previous Europa League tie against Lincoln Red Imps after recovering from a knee injury. Speaking ahead of kick-off, Gerrard admitted the 38-year-old’s depth of continental experience was a significant factor in deciding the one alteration to his line-up. It proved a wise move.

The ten outfield players quickly sought to expunge the memory of dropping points in Leith. Less than two minutes had elapsed when Goldson launched a terrific long pass that eluded the Dutch defence and found Kent, who had ghosted into a central area.

The £7million man has shown outstanding awareness in the early weeks of this campaign, but seemed to lose track of the ball for a crucial split-second. 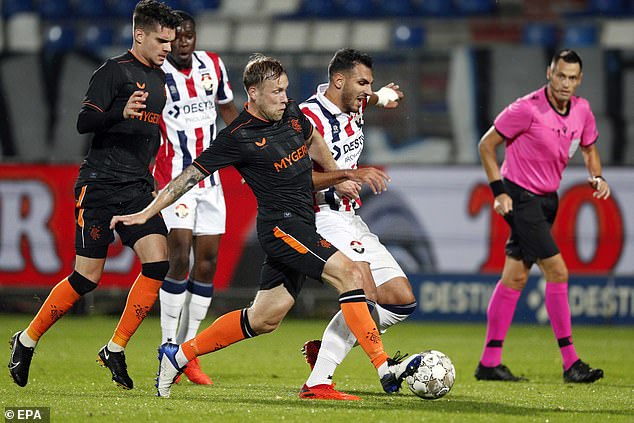 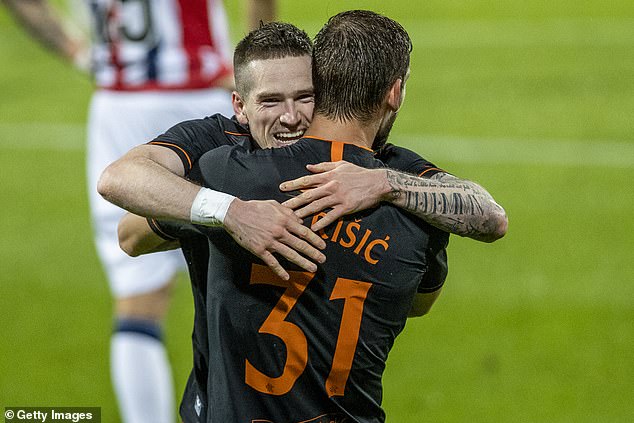 Ryan Kent was prolific, scoring a goal and setting up two for his team-mates

Unable to sort out his feet, a prime opportunity for a perfect start slipped away.

It was a lapse Kent more than corrected by the midway point of the first half. But not before Willem II managed to cause some alarm.

They were aided by an outbreak of slack possession from Gerrard’s men. Ianis Hagi was among the culprits and it was his poor pass that set the hosts running after 15 minutes.

Derrick Kohn chanced his luck with a powerful long-range strike that skidded up off the greasy surface and struck McGregor squarely on the chest. Vangelis Pavlidis closed in to try and net the rebound but was denied a clear run by a Helander slide and could only clip the top of the bar.

The 21-year-old Greek striker is a prized asset in Tilburg and a threat highlighted by Gerrard. When set up again by a cutback from Belgium Under-21 playmaker Mike Tresor, an angled effort flew too high.

Rangers breathed a sigh of relief. And quickly capitalised. Kent was again on the move to meet a lofted through ball from Steven Davis inside the area. This time, the touch on the outside of his right foot was perfect.

Miquel Nelom stepped across to try and cover but could only clip Kent to the floor. Italian referee Maurizio Mariano immediately pointed to the spot. 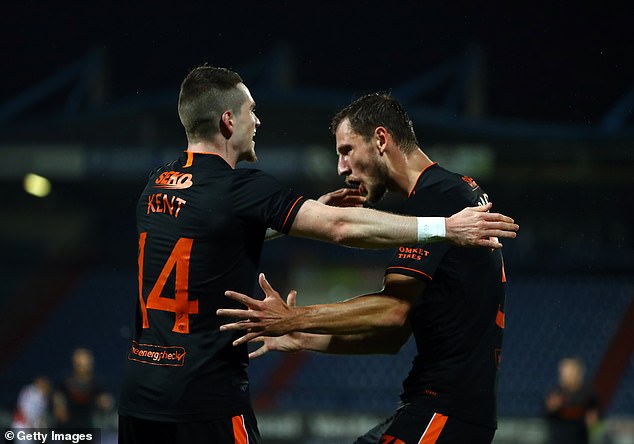 Tavernier picked up the ball. The Ibrox captain missed his third penalty in five attempts against Motherwell last October and hadn’t taken one since.

His restoration to the role was handled with confidence. A thump past Robbin Ruiter was Tavernier’s first successful spot-kick conversion since a double against Aberdeen almost exactly 12 months ago. And his 50th Rangers goal overall.

That 22nd-minute breakthrough was more than welcome. Within three minutes, Rangers had doubled their advantage to take a firm grip of the tie.

A firmer grip, certainly, than Ruiter managed. The former PSV Eindhoven keeper could only shovel outwards when Alfredo Morelos sent in an optimistic, slightly scuffed attempt from 25 yards. Kent was once more the sharpest player on the scene, getting in to nudge home the loose ball with his left foot.

Rangers were in control. Even so, there was a degree of vulnerability during the remainder of the first half that continued to give Willem II some hope.

Lovely interchanging led to Pavlidis pulling the ball back for Dries Saddiki. He looked certain to reduce the deficit but was denied by a superb McGregor save. Spreading himself to block, it was a vital intervention that vindicated his selection. 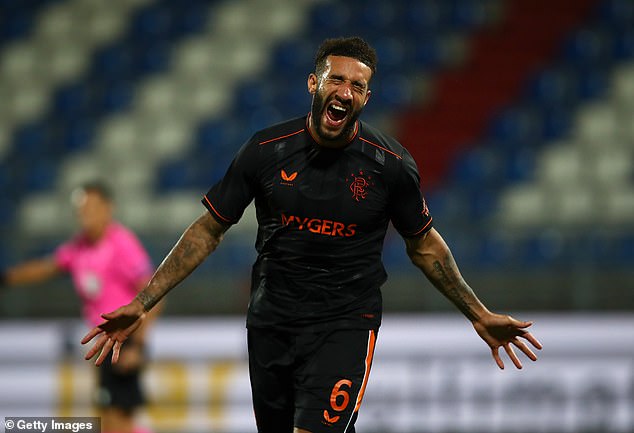 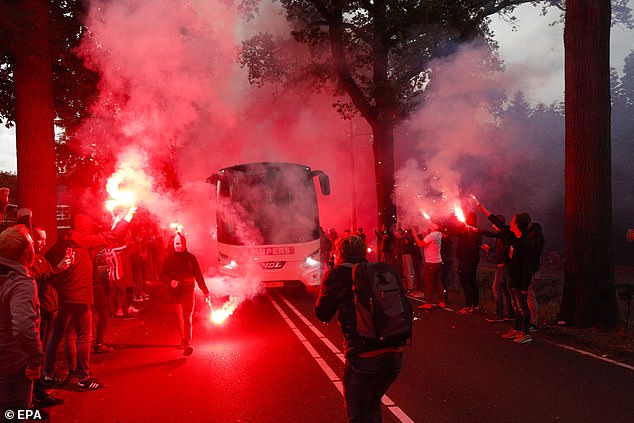 McGregor was called upon again within two minutes of the second-half restart. This time he stuck out a foot to repel Gorkem Saglam’s low effort.

Any lingering nerves were settled when Kent delivered the perfect cross for Helander to send a downward header into the net on 55 minutes. It was a finish matched with 19 minutes to play, when Goldson guided in a Tavernier corner.

There was still time for one late burst of McGregor heroics. A remarkable diving block thwarted Pavlidis before the striker used an arm to knock in the rebound.

Rangers should have added a fifth but Hagi spooned over after a fine run from sub Jordan Jones. By then, however, they had delivered all the bang they needed.

Coronavirus forces top clubs across the country to lay off scouts

Lincoln 2-7 Liverpool: Clinical Reds ease past League One side as Jones and Minamino score twice