Top Football News
Arsenal target Houssem Aouar insists he’s ‘very glad’ he stayed at Lyon...
Liverpool ‘can sign Ajax starlet Perr Schurrs for £27m in January’
Chelsea ‘believe they are in pole position to land David Alaba on...
Neymar warns PSG they have to improve and play more as a...
Lennon set to take charge in Milan with Celtic powerbroker Desmond resisting...
Ten years after the Venky’s took over at Blackburn – the Rao...
Eighth division side Marine to take on Premier League leaders Tottenham in...
Javi Martinez would ‘like to try something new’ with his Bayern Munich...
Former Celtic boss Gordon Strachan is now FAVOURITE ahead of Eddie Howe...
Inter Milan target six-month loan move for Chelsea striker Olivier Giroud
Home Transfers Real Madrid ‘would consider a swap deal involving Isco and Vinicius for Juventus star Paulo Dybala’
Transfers

Real Madrid are ready to make Juventus a very tempting swap offer in order to sign Paulo Dybala, according to reports.

Dybala, who has been linked with a move to the Bernabeu in recent years, is wanted again by Real and Zinedine Zidane could be willing to give up two first-team players to finally land the Argentine.

According to Calciomercato, Real could be willing to let both Isco and Vinicius join the Italian champions in exchange for Dybala as Zidane looks to bolster his frontline. 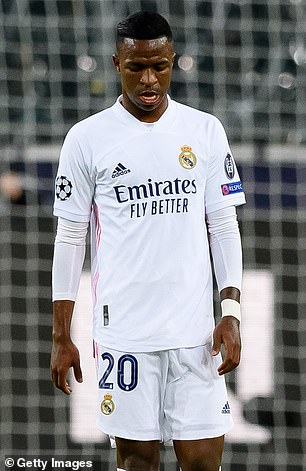 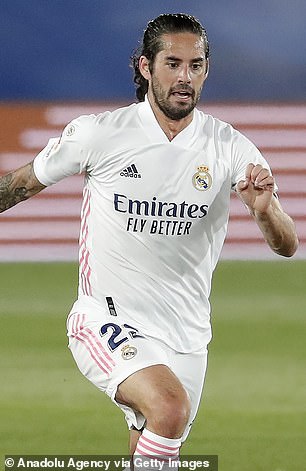 Zidane has been a long-time admirer of Dybala and failed to bring him to the Bernabeu in previous years but a 2-for-1 swap offer could test Juve’s resolve.

A new move for Dybala comes off the back of multiple dressing room fallouts at the Bernabeu in the last week.

Reports of a departure for either Isco or Vinicius comes days after the pair were involved in separate controversies, leading many to question their futures at the club.

At the weekend, Isco was caught on camera criticising Zidane’s tactics during El Clasico, with the Spaniard voicing his frustration at being left on the bench. 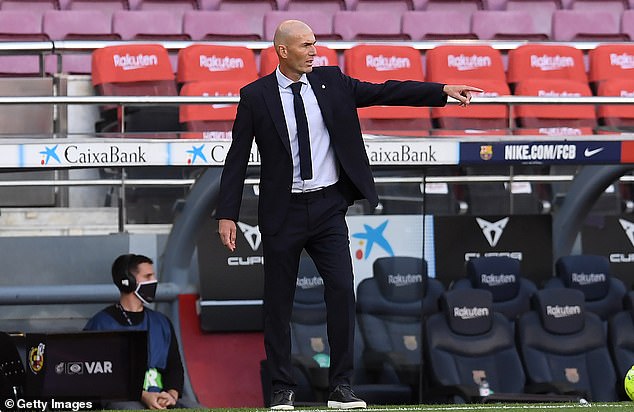 The 28-year-old’s recent performances have resulted in a backlash from club captain Sergio Ramos, who reportedly confronted the midfielder in the dressing room.

Isco was filmed questioning the timings of Zidane’s substitutions by Spanish TV station Movistar saying: ‘If he (Zidane) has to bring me off, he substitutes me in minute 50 or 60 of the game, sometimes at half-time.

Following Isco’s gaffe on Saturday, the Real Madrid dressing room was sent into further turmoil after footage revealed Karim Benzema told Ferland Mendy ‘not to pass’ to Vinicius during the half-time interval of the Champions League clash with Borussia Monchengladbach. 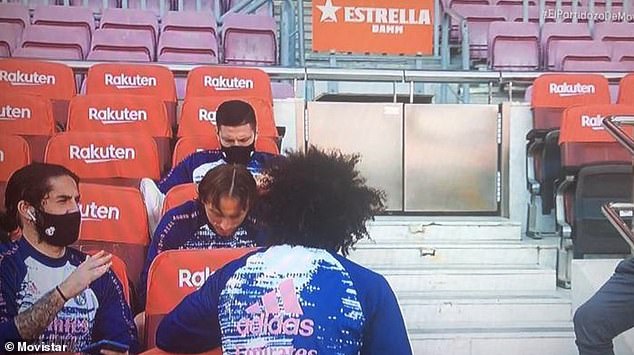 The Frenchman was picked up by cameras in the tunnel at Borussia-Park discussing the 20-year-old, claiming the Brazilian was ‘playing against them’ despite being within earshot of the duo.

After this, Spanish news outlet MARCA claimed Spanish TV station GOL TV picked up more detail from the conversation, with Benzema reportedly telling fellow Frenchman Mendy: ‘He [Vinicius] does not do anything useful,’ with the left back replying: ‘When he becomes scared, he loses what makes him great.’

All three players then talked on the pitch before the match restarted in the second-half, but the comments are not audible. 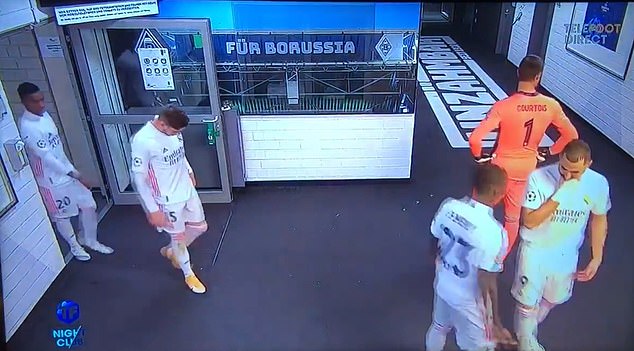 Cameras in the tunnel at Borussia-Park picked up a conversation in French between Benzema (bottom right) and Ferland Mendy, who were reportedly talking about Vinicius (top left) 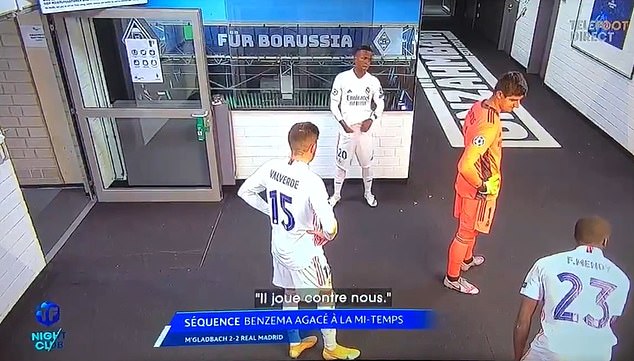 French news outlet Telefoot released the footage following the game on Tuesday, which shows the Real Madrid players filtering out from the dressing room and into the tunnel for the second half.

It remains to be seen how Vinicius’ future will play out at the club, considering the reigning Spanish champions paid £38million for him in 2018.

But Zidane could be willing to take a loss on the winger in order to bring in Dybala, who can fill the gap left by Vinicius or in the hole where Isco plays.

Dybala struggled to help get a result against Real’s rivals Barcelona in the Champions League on Wednesday, after the Catalan giants ran out 2-0 winners in Turin.