There is something ominous for the rest of the Championship in the sight of Teemu Pukki banging in the goals again.

The man who scored 29 times the last time Norwich City secured promotion to the Premier League appears to be hitting his stride once again after a slow start by his standards.

Pukki’s double in the opening quarter-hour against Bristol City formed the foundation of Norwich’s fourth victory in five games, a sequence that lifted Daniel Farke’s side into second position ahead of the 3pm kick-offs. 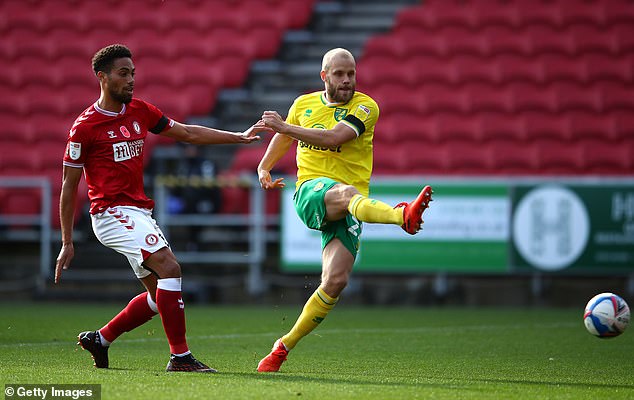 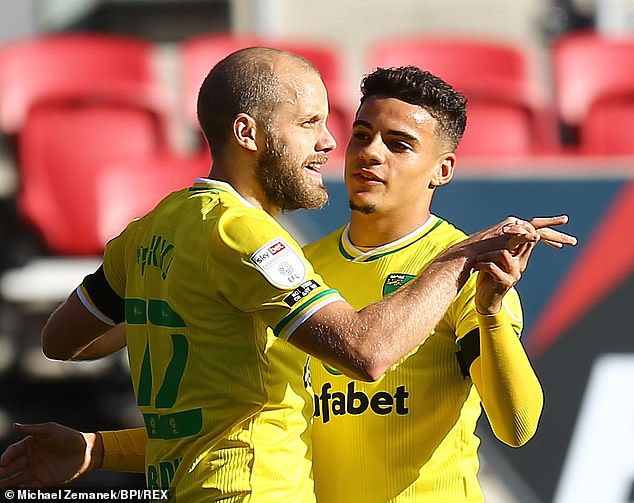 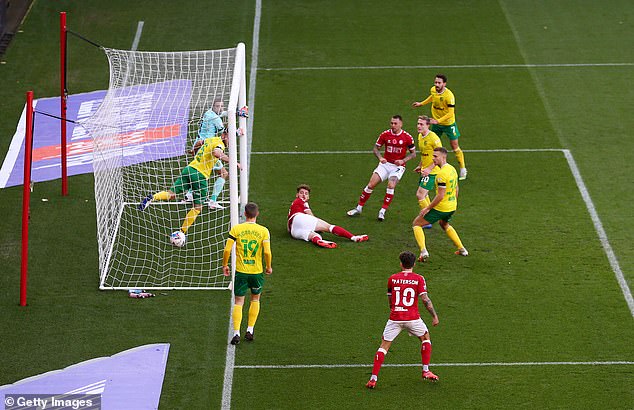 It confirmed that the Finnish striker still has that innate ability to slip beyond defenders and really the only thing his team-mates have to do is find the pass to pick him out.

That’s what happened early on at Ashton Gate as Pukki ran Bristol City’s three-man defence ragged and the hosts weren’t able to find their way back.

It’s now five games without victory for the Robins even though Jack Hunt did respond swiftly to Pukki’s second and Nahki Wells had the chance to further reduce the arrears after Emiliano Buendia had put Norwich 3-1 ahead just before half-time.

But Wells scooped his Panenka penalty over the crossbar and any notion of a stirring Bristol comeback went with the ball. 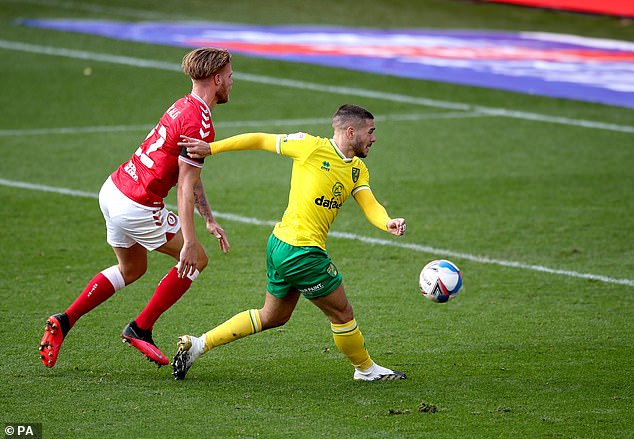 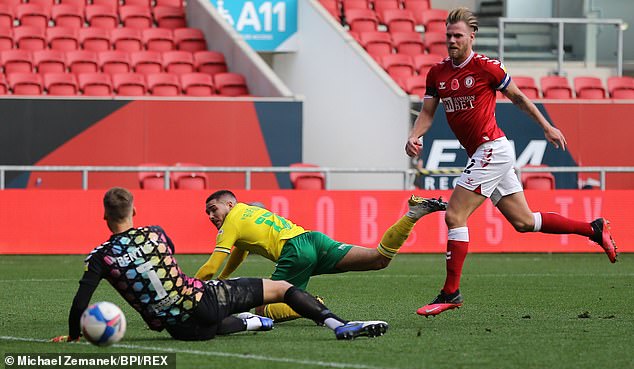 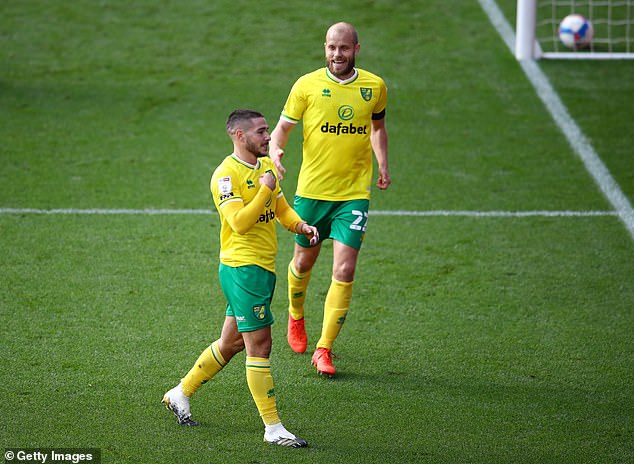 Norwich, meanwhile, are gathering momentum after shaking off the hangover of their relegation from the Premier League.

‘We always want to start quickly but in the first half we were excellent with some great combinations, some precise finishing and good first touches,’ Farke said on Sky Sports.

‘We would have preferred a bit more control in the second half, the penalty was a bit unnecessary, but all in all the way we won, I can’t complain too much.’

As was the case during their last promotion campaign, Norwich have a knack of scoring dramatic late goals and last-gasp winners against Rotherham, Birmingham and Wycombe, plus a late equaliser in the week at Brentford, had been behind a rebound in form.

But, by contrast to those games, there was a distinct urgency about their scoring here as they surged into an early two-goal lead.

Bristol City’s back three set-up was clearly a target for Farke and his team who’d figured out they could manoeuvre round it with just one effective pass.

That was certainly the case six minutes in when Marco Stiepermann played an excellent through pass into Pukki, who’d peeled off Zak Vyner to find space and crashed a low shot past Daniel Bentley into the net after a slick controlling touch. 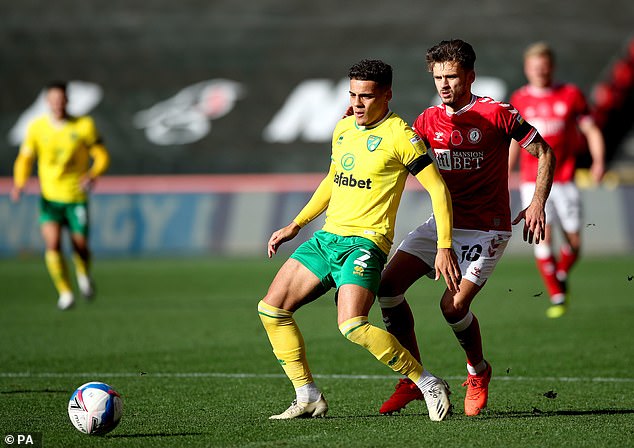 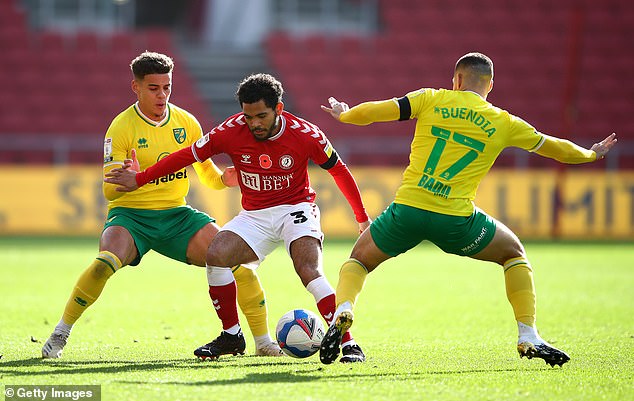 Surprisingly, that was Pukki’s first away goal since January which says plenty about the step up in class between the Championship and the Premier League.

It was the Finn’s third of the season and No 4 wasn’t long in arriving. This time it owed everything to a superb cross-field pass from left-back Jacob Sorensen who carried the ball to the halfway line and spotted Pukki’s latest run in behind.

Picking the striker out with the ideal pass, Pukki found the bottom corner thanks to a telling deflection of Tomas Kalas, who looked all at sea in the back three.

Dean Holden’s team looked shell-shocked but such was the open nature of the contest they were able to halve the deficit moments later.

A quick break down the left channel led to Jamie Paterson being played through, his shot was parried aside by Tim Krul and popped out to Hunt to finish from close range despite the presence of yellow-shirted covering defenders.

It sparked a revival from the home side and Wells was soon curling a shot fractionally wide after move good work down the right by Hunt to draw away the defenders. 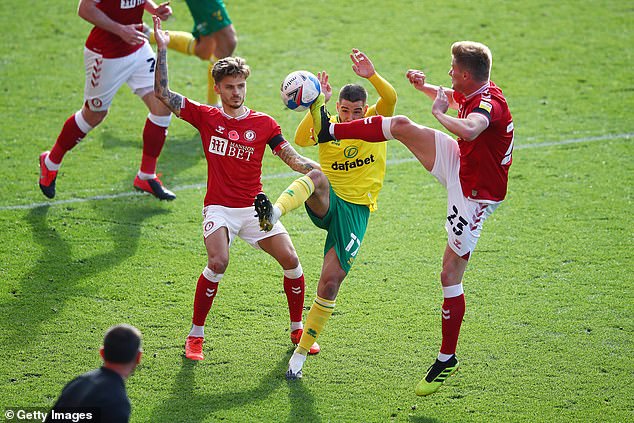 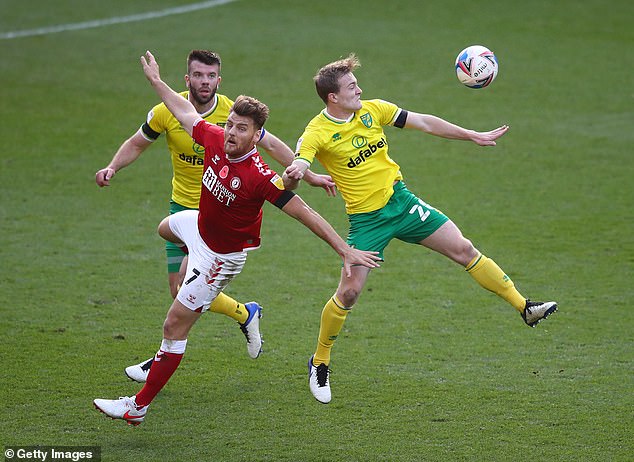 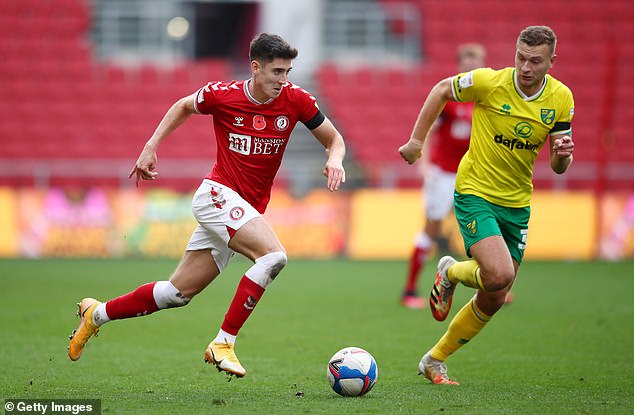 Hunt then surged to the byline, crossing low into Wells who took Ben Gibson out the game with a neat first touch only to scuff his shot.

Krul made some outstanding saves at Brentford on Tuesday night and the Holland international did so again to deny Chris Martin’s header from a corner and then Wells’ rebound for good measure.

Norwich, though, gained a second wind and restored their two-goal cushion on the stroke of half-time.

But not before a warning when Przemyslaw Placheta’s sublime outside-of-the-boot through pass sprung Buendia, whose shot struck Bentley flush in the face.

Buendia wouldn’t be denied in stoppage time, though, and this time it was Gibson’s perfect cross-field ball that made the difference, just clearing the head of Kalas.

The Norwich man took the ball down with a brilliant touch and rolled the ball beyond Bentley with assurance.

The visitors started the second-half with the intention of quickly killing the contest with Stiepermann just clearing the crossbar, Lukas Rupp dragging a shot wide and Pukki sending an Aarons cross wide at the near post.

Holden replaced Taylor Moore with Tyreeq Bakinson just before the hour and with it came a change of formation to a back four that almost paid off immediately.

Martin was able to steal half a yard on Skipp on the edge of the Norwich box and curled a shot that cracked back off the far post in a warning the visitors couldn’t ignore.

The system change led to a sustained spell of Bristol City pressure and a floated free-kick by Chris Brunt wasn’t met clearly by Wells in a good position.

And it wasn’t long before that pressure told with the panicking Sorensen, on his knees after failing to cut out an aerial ball, guilty of bringing Kalas down inside the box. 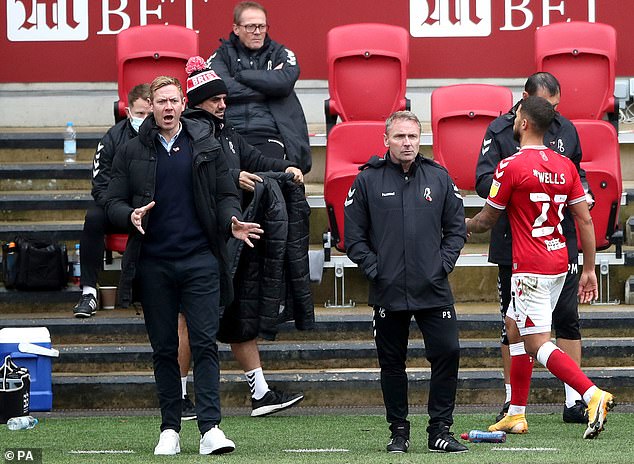 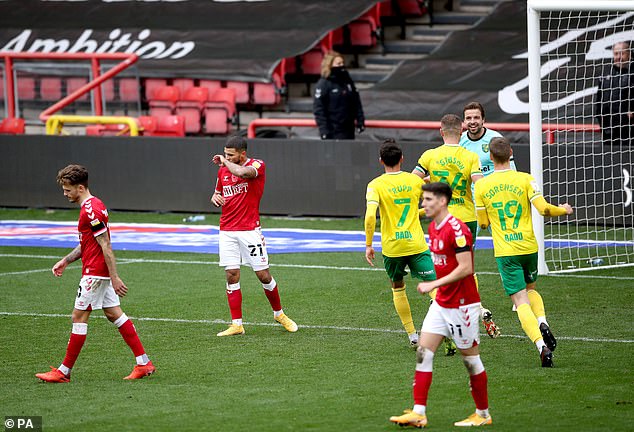 But Bristol City couldn’t capitalise, with Wells too clever by half as his attempted Panenka went horribly wrong and cleared the crossbar.

Wells has now missed six of his last nine penalties in the Championship and you suspect he won’t get the next one after that. He was taken off for Famara Diedhiou and eye contract with his bench was in short supply as he left the action.

The miss took all the wind out of Bristol’s sails and Norwich could easily have added further embellishment to the scoreline.

Placheta drew a save from Bentley with an angled shot before firing just wide of the post. Bentley then denied the Pole once again in a one-on-one.

Still the chances flowed for Norwich, who excel at late goals, and Buendia plucked a cross out the air with a silky touch before testing Bentley once more.

As it turned out, three goals was enough as Norwich march on.

Premier League bailout of the Championship will reward...

SECRET SCOUT: Freddie Woodman can be a valued competitor...

League One and Two clubs being bailed out...

Wayne Rooney reveals he has taken advice from...