Sevilla coach Julen Lopetegui didn’t much enjoy losing 4-0 to Chelsea on Wednesday but there are still few coaches he would swap places with at the moment, and Zinedine Zidane is probably not one of them.

It was just over two years ago when Lopetegui was unceremoniously sacked by Real Madrid after just two months of the season. On Saturday he could send his opposite number Zinedine Zidane teetering towards the same fate.

Zidane has three massive games in the next week with league matches against Lopetegui’s Sevilla and Diego Simeone’s Atletico either side of the must win final Champions League group game with Borussia Monchengladbach. 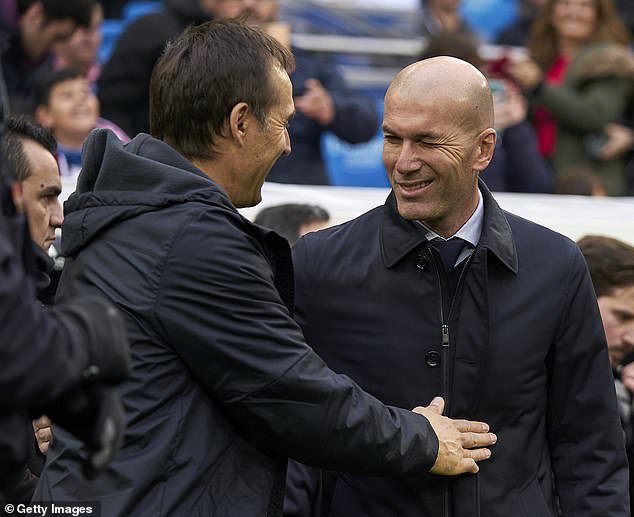 But Lopetegui (left)  has otherwise impressed as Sevilla boss ahead of his upcoming clash against former employers Real Madrid, now managed by Zinedine Zidane (right)

It’s the European encounter that carries the most importance but losing to a former Real Madrid coach who was dumped after just 14 games in charge would only strengthen the case against Zidane continuing.

Lopetegui survived that ego-shredding short sharp shock at Madrid. When the Champions League draw is made for the last-16 on December 14 he knows his Sevilla side will be in it. Zidane still cannot be sure about his Real Madrid.

Lopetegui, like Zidane, also won silverware last season, with the Europa League win over Inter leaving him in tears at the final whistle.

He’s an emotional man and his journey back from the humiliation, not just losing the Madrid job so quickly, but having sacrificed his chance to take Spain to a World Cup to get it, has been an incredible one. 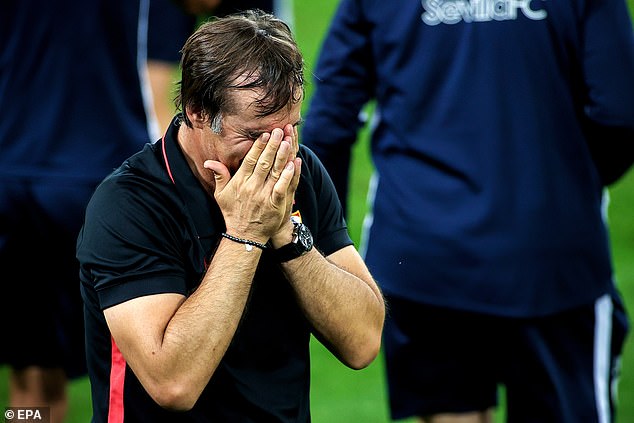 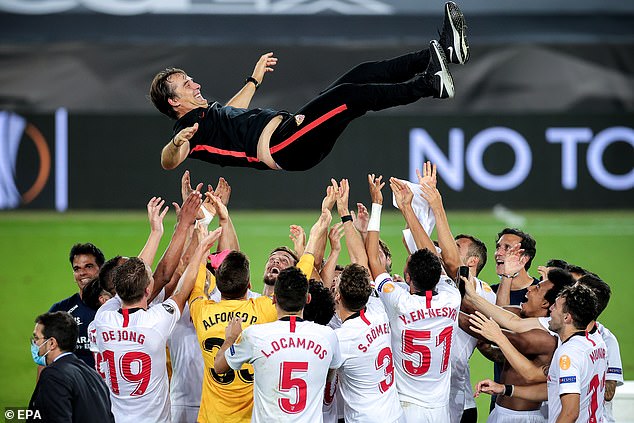 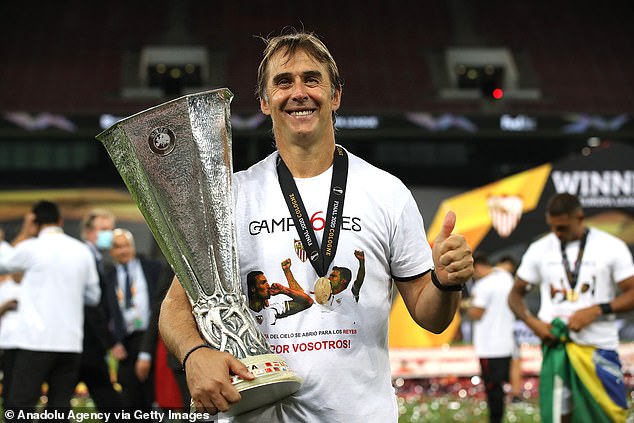 The 54-year-old has always been hugely respected as a coach. He took Spain’s Under 19s to Euros success in 2012. He coached the Under 21s to Euro success a year later and when he accepted the top national job he took the team to the World Cup finals in style.

On the eve of the tournament in Russia he accepted the Real Madrid job and he made the mistake of agreeing that it would be best if he was open and up-front about it.

His announcement that after the World Cup he would be leaving to take over at Real Madrid infuriated the head of the Spanish Football Federation, Luis Rubiales, who sacked him.

The players wanted him to remain in charge for the tournament. Captain Sergio Ramos took on Rubiales but Rubiales came out on top and Lopetegui was making tearful goodbyes before Spain had kicked a ball. 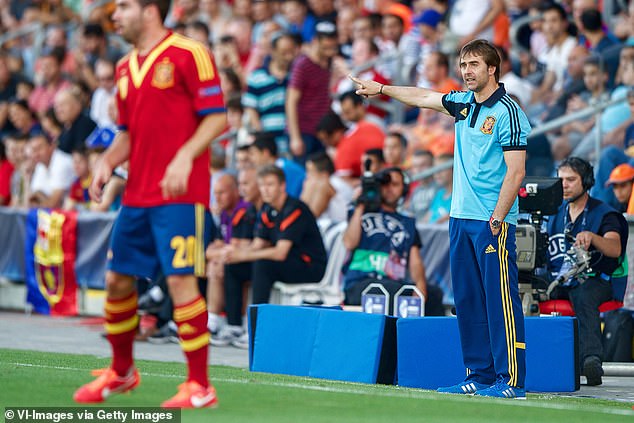 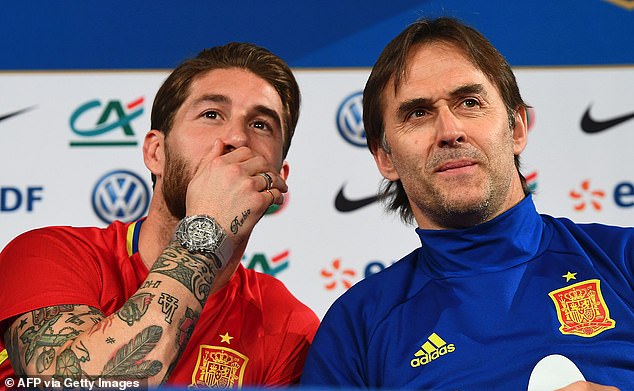 Despite support from Sergio Ramos (L), Lopetegui was sacked on the eve of the World Cup

Making a success of the Real Madrid job would have compensated somewhat for missing the chance of a lifetime to take his country into a World Cup finals, but when that did not happen he was left facing an uncertain future in the managerial wilderness.

He had lost 5-1 to Barcelona in his final game in charge at Madrid. The rule in Spain that means a coach cannot manage two teams in the top flight in the same season meant he had to lay low for a year with no chance to erase the memory of that loss.

When he got the Sevilla job their fans did not take to him straight away. They are ardent Spain fans down in the south and many agreed he should not have been negotiating with Real Madrid job when the World Cup was about to start.

But the supporters trusted sporting director Monchi, whose judgement is rarely off. Lopetegui had plenty of ammunition with Monchi making as many as 11 signings and he moulded them into a team in just a year. And after a summer when they managed to keep star centre-back Jules Kounde from the clutches of Manchester City, they still look like a team who need fear no one. 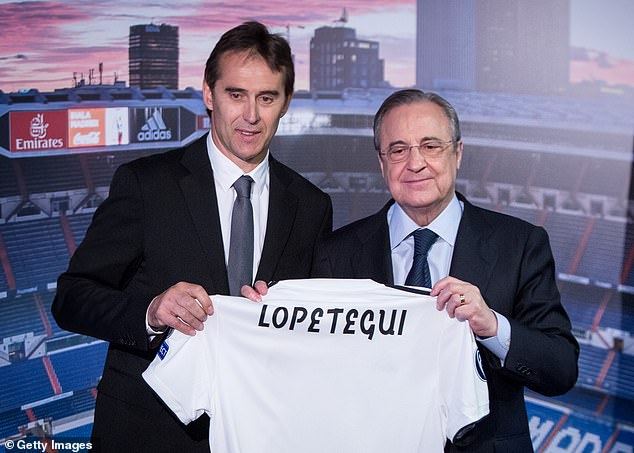 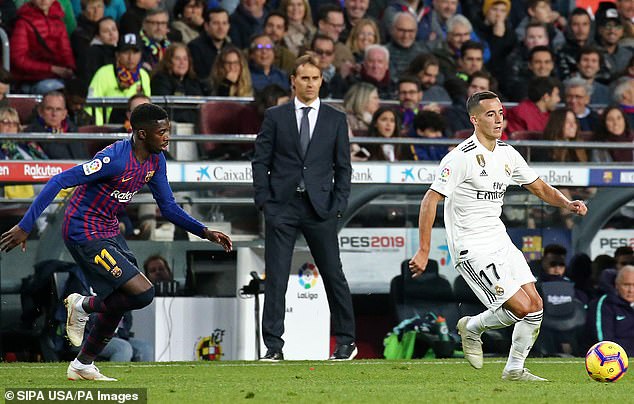 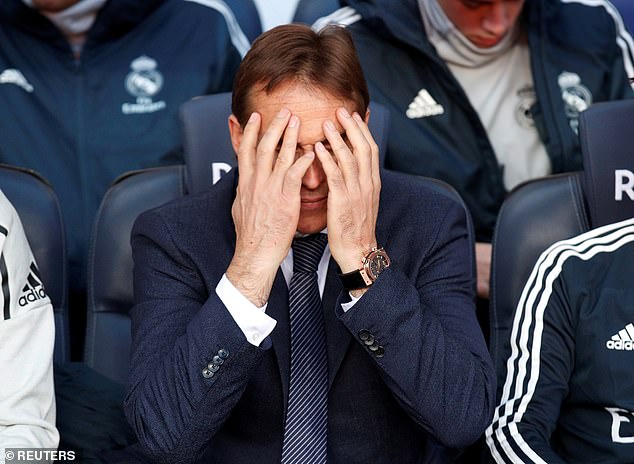 The Chelsea hammering has been put down as a blip with the side relaxing because they had qualified and affected by having to play their third choice goalkeeper when Tomas Vaclik pulled out in the warm-up.

This weekend it ought to be back to business and if they beat Madrid on Saturday they will go above them in the table.

Lopetegui will celebrate that with all his usual fist-pumping enthusiasm. He will probably feel for his opposite number at the same time knowing he will be sending Zidane into Wednesday’s Champions League decider with Borussia Monchengladbach in an even weaker position.

He was once the beleaguered boss at the Bernabeu, even lonelier than Zidane, who knows he will go as a serial trophy-winner, if he does part company with the club.

Lopetegui was dubbed a failure when he was sacked. But he has since left that tag, far behind. 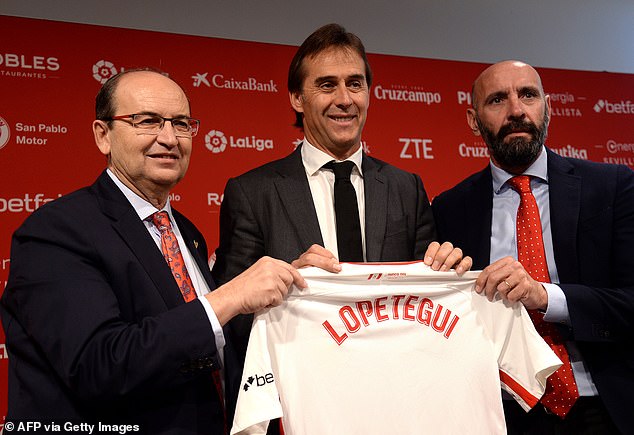